Congratulations to Coach Dale Dolejsi from Kennedy Catholic High School for being selected as the NBUA 2019 High School Varsity Coach of the Year award recipient.  There were seven worthy candidates for the award this year and Coach Dale came out on top by a few votes.  A plaque and an invitation to join us at the annual banquet on September 21st at Maplewood Golf Course were given to Dale at the Kennedy Catholic Spring sports banquet on Tuesday May 28th by Allen Christie.  It was a little different from other presentations because it was done in front of the entire Spring sports athletes and parents (about 300 people).  Dale is a beloved art teacher at Kennedy and has been the head coach for baseball for six years.  He was genuinely humbled by the award and had very respectful things to say to the student athletes and parents about sports officials.  He said he will definitely be joining us at the banquet and will be playing golf.  After all, he used to work at Maplewood Golf Course.

Thank you to all of you who participated in this nomination and voting process.  Your selection of an award winner means a lot to the coach and the school and generates a lot of good will between NBUA and our customers 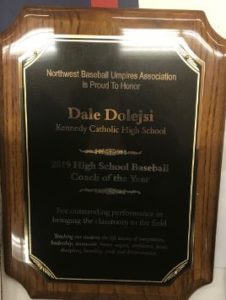 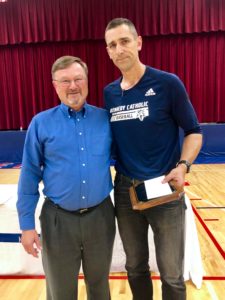